I got an invitation for Trekking to join them for Stok Kangri Expedition, I also wanted to go but I had some urgent work to finish at home, so I have to say “No”. But in my heart, I was longing to say yes at once. Finally just a day before- when they were about to begin from Manali to Ladhakh I called him up and asked him to wait for me. I left Jaipur by the morning train and reachedDelhi and booked myself for the onward journey to Manali

Adventure starts from here…I reached Manali on early morning of the next day. We were total 7 people plus the, trekking equipment. With entire equipment and 7 of us can’t go in one Jeep or Toyota Qualis. So, we sent some of the stuff ahead in a bus as suggested by our driver Mr. Tule Ram. We started past 12 noon from Manali. Our route was the famous Manali to Ladhakh via some of the world’s highest motorable roads RohtangPass, Nakki La, Baralacha La andTanglang La (La in Tibetan means a pass). The road condition from Marhi to Rohtang pass was like as if there is no road at all and one has to drive though 2 feet of mud. At several points small cars were struck and there was a huge traffic jam. It took us 5-6 hours to cross RohtangPass from Manali where the total distance was 60 KM only. The drive from Rohtang to Leh is full of adventure, superb landscapes, high altitude passes, criss cross roads, amazing cottage hotels, white parachute shops etc. but I don’t want to get into those details (that makes altogether different story). Next day around 10 PM we reached Leh with a night halt in Khoksar. 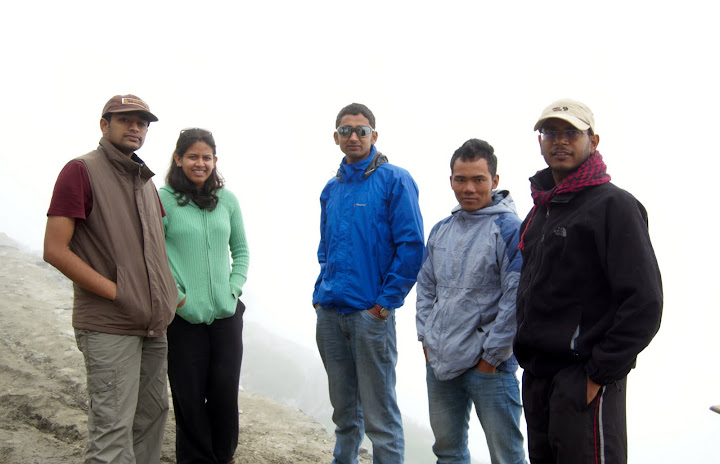 Leh is the capital of Ladhakh region of Indian state ofJammu and Kashmir. “Ladhakh” meansLandofPassedin Tibetan language and It is also called the colddesertofIndia. Both stands true for Ladhakh is surrounded by mountains and it receives minimal rainfall and at an average altitude of 10,000 ft it is a cold desert. From November to May this remains cut off from rest of the world except for flights.

Stok Kangri: (elevation 6153Mts or 20,182 feet) is the highest mountain in the Stok range of theHimalayas in the Ladakh. The peak is located in Hemis National Park. It been declared as the trekking peak by IMF, so this makes it very famous among the serious and amateur mountaineers. It requires minimal technical skills but because of its altitude one must have proper fitness and a well planned acclimatization schedule to high altitude.

We were given two days to rest and acclimatize our self but I came by the road and fully acclimatize to Leh’s altitude so we had a quick excursion to Khardung La “the highest motorable road in world”, Leh Palace and Leh city. Smoking and alcohol should be strictly avoided because it slows down your acclimatization process but I couldn’t resist myself  having some beer and few puffs. We started the next day around 9 AM and reached Stok village by jeeps and it’s the place where the trail to stok starts. We reached basecamp with one night halt at Manokarma and it was easy trail for me even with a backpack weight of around 10-12Kgs. We went for two small height gain treks to near by hill of our campsite and one till the snow patch to practice and get used to crampons as most of us have never used them before.

Height of Adventure (6153Mts): We were briefed during our evening tea the today we are going for our first summit attempt and we were told after dinner at 7 PM have good sleep for 4-5 Hours. We were divided in two parties first one to leave basecamp at 11.30 and second one at 12.30, I was party to second one. After having our dinner Rakesh, Sandeep and me went to our tent packed our backpacks and equipments, then slipped into our sleeping bags and after that our discussion started on various topics which ended at around 10 and we slept for one and half hour then I woke up Sandeep and told him that we are half an hour behind schedule. Sandeep went with the first party as he was leading it and Rakesh and me with the second one. We left basecamp around 12.30, I clicked picture of my wrist watch and didn’t take out my camera until the sunrise. There were two thing which were posing challenge first one was cold and second one was thin air leading to heavy breathing  at an altitude which was around 4900Mts. I used to take four five steps and I was out of breath. We kept walking with our headlights on and it was full moon which helped us a lot. Soon came the first steep climb where we came to know the real effects of high altitude. I was taking three breaths for every one step. We reached advance basecamp where mountaineers set up the advance camp and here we meet our own advance party. It was still dark and we seeing the series of headlamps at a distance around 1KM, they were not moving and our guide told us that that is the place where we need to put up our crampons. I kept walking with my fellow team members and following our high altitude guide Mr. Pasang from Nepal who had many accolades in mountaineering including summiting Everest thrice and a marathon runner from Everest basecamp to Lukla. We were walking over the frozen ice and at some places we were hearing sound of water flowing beneath us but not visible, even we heard the sound of ice breaking which was very frightening. Now we reached the spot where need to put our crampons and those headlamps were visible from far distance. It took almost three hours to reach here. It was around 4 ‘O’ clock in the morning and it was very cold, I was feeling thirsty and took out my water bottle but it was frozen. I started shivering I put two extra layers of lowers, a wind proof jacket and an extra pair of gloves. I put on my gaiters but unable to wear crampons, Pasang helped me in wearing them. Now we were above 5500 Mts which is to be considered as extreme high altitude and there were clear sign of mountain sickness. Acute headache and feverish feeling was killing. Now ahead of us was the toughest part of the climb gradient of 45 degrees, hard frozen snow and very thin air. I was taking one step and breathing three times. I looked forward carrying a question in mind “How much is left” and then backward and thinking “How much progress I have made”. When I was looking at fellow climbers I was laughing how slow we were walking everybody there was struggling for breath. At around 5.30 first rays of fall on us, the feeling I had cannot be expressed, I took out my camera and clicked few quick shots of sunrise. Walking very slowly we reached the end of the snowpatch. Pasang opened the route and we crossed it one by one. Now the remaining route was rocky so we removed our crampons. We roped up (Mountaineering technique where in you are attached to one another for safety) and started walking. It was balancing act as you need maintain proper slack and tension, at times it was very frightening also especially where you are crossing a ridge. Only thing which was the sole motivation to move is the tall overlooking summit of the peak. We took the final break waited for every one to arrive. Now sun was giving much needed relief from the cold. I had my energy bar and drank some water. Now we pushed for the final leg of the summit attempt. I freed myself from the rope and was ahead of everyone. It was last some few steps and I couldn’t stop myself from running. Hurray!! I was at the summit of Stok Kangri Trek and I kissed the prayer flags there. It was moment of joy and we congratulated everyone who was there on the summit.